2016 is set to be another massive year in movies. We’re getting no more than 8 comic/superhero related movies. This not only means plenty of heroes filling our screens, but also plenty of villains! We’ve always been a fan of a villain done well, take a look at our previously noted all time most likable series and movie villains here and here. Characters like Darth Vader, Freddy Kruger and Jason was done perfectly. Looking ahead at 2016 and the potential blockbuster movies coming our way we speculate as to which movies will  deliver us the perfect villain.

10 Greatest Movie Villains Expected in 2016, in no particular order:

Actor Ed Skrein tweeted the image of himself in the role, though this shot isn’t particularly villainous. In the comics, Ajax is the henchman at a home for failed Weapon X super-soldiers. He went through a series of procedures that gave him increased agility and strength, and his nerves were surgically removed to give him a superhuman tolerance for pain. At least some of those elements are bound to be present in the movie incarnation

The problem is Ajax is not Ultron or Dr. Doom or Green Goblin or Joker or even Apocalypse. He’s, frankly, a character most audiences won’t know. While this movie might have a largely unrecognizable villain, expect that to change in Deadpool 2 as a major Marvel character will be facing off against the Merc With a Mouth. Director Tim Miller spoke to Empire about the new Deadpool trailer and spoke a bit about the villains, or lack thereof, in this movie before revealing who he thinks should appear if they ever get a chance to make a sequel.

There aren’t really many definitive Deadpool villains, apart from Cable. If we don’t put Cable in Deadpool 2 I think we’ll be run out of town on a rail.

Fox has been trying to figure out a way to incorporate Cable into an X-Men film for years. In 2009, they hired a group of writers to come up with ideas for a variety of superheroes, including Cable. Recently they announced plans for an X-Force movie with Cable leading the mutant spinoff. Neither of those efforts bore any fruits so using Deadpool to introduce Cable to movie audiences might make sense.

It’s a different type of Villain, but is an old school type “take over the world” type villain. Perfect for our list!

Doomsday Will be A Major Villain In Batman v Superman: Dawn Of Justice. When the titular characters of Batman V Superman: Dawn of Justice aren’t trying to make each other bleed, they’ll be dealing with the movie’s true villain Lex Luthor. Doomsday is one of those Thanos/ Apocalypse  type villains…too big to put on screen which means no matter what we will be disappointed in his movie depiction. This leaves Jesse Eisenberg’s attempt at Lex Luthor:

In the comics, Doomsday was the creation of an alien scientist who was attempting to create the perfect weapon. Forced to survive the cruel conditions on prehistoric Krypton, this creature slowly adapted to its surroundings and became more powerful, to the point where he was able to eventually kill his creator and escape the planet. After rampaging across the universe, Doomsday arrived on Earth and brutally fought Superman in the streets of Metropolis in the Death of Superman storyline. As the story’s title suggests, Doomsday was successful in murdering the Kryptonian, though he also perished during the battle because the two aliens were equally powerful.

In our humble opinion this is the greatest villain ever. We are seriously excited to see him in this movie. Our first impressions of those horrid purple headed screenshots that we saw was not a good start, but the trailer salvaged our hopes of seeing a true depiction of this great villain.

We knew that Daniel Bruhl has been cast, and we’ve even heard that he’ll play the villainous Baron Zemo. While this has been widely accepted as truth, Bruhl himself recently confirmed these reports, months after being cast. Talking to The Independent, the 36-year-old Spanish-German actor admitted that will play Zemo, adding: 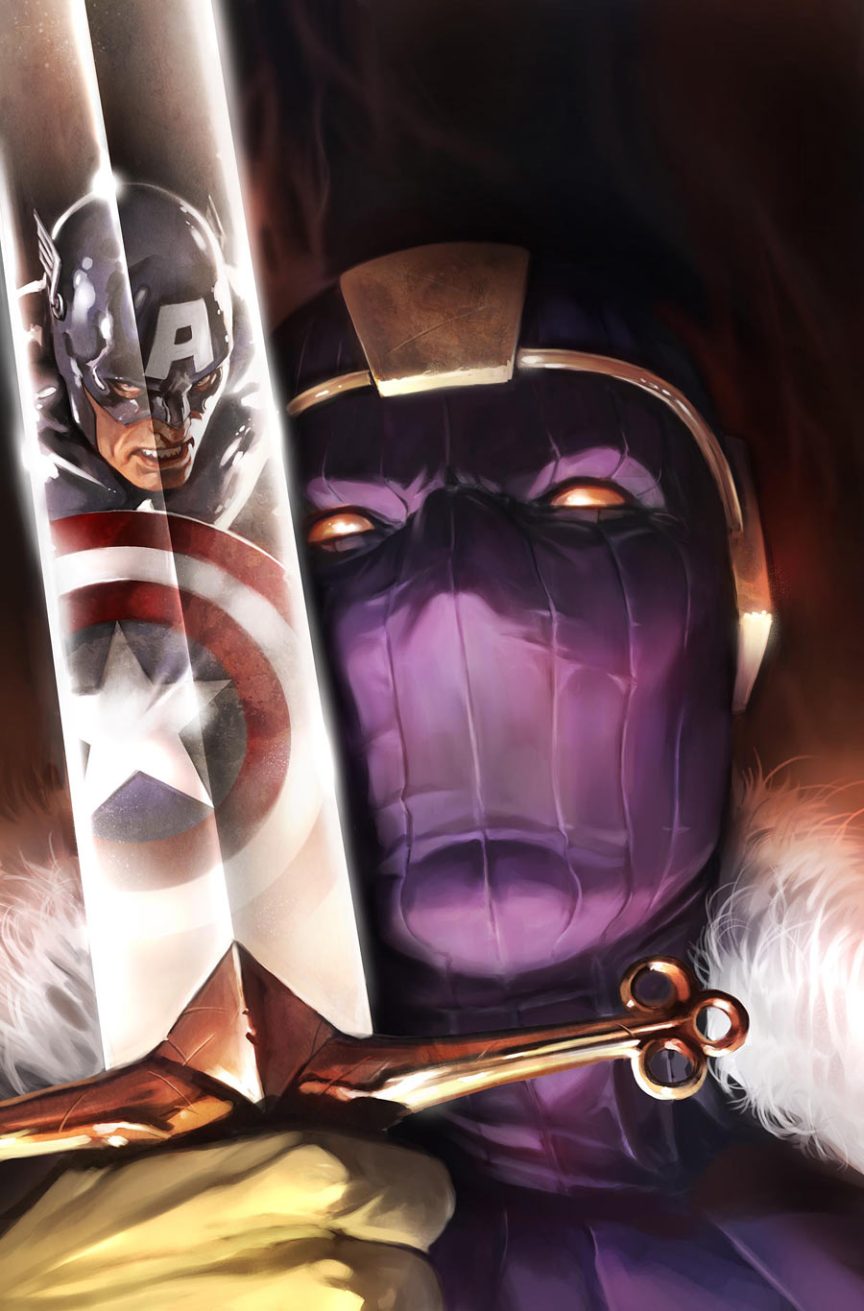 The purple-masked Baron Zemo is one of Captain America’s most prominent enemies, and over the years there have actually be two incarnations to contend with. The first Baron was Heinrich Zemo, a Nazi scientist Cap fights during World War 2, and who ultimately perishes in combat. In Civil War, Bruhl will play the second version of the antagonist, Helmut Zemo, who is the son of the original,  and who follows in his father’s footsteps looking for a spot of revenge.

Also See: Who Is Zemo – The Main Villain In Captain America 3

Our money is on Guld’an, but blackhand will probably at the front of the villainous horde. Being avid World of Warcraft players, we pretty much know already…but won’t spoil it. During the bulk of the First War, Blackhand the Destroyer serves as the Warchief of the Horde. The brutal leader is as tactically brilliant as he is power-hungry and his ruthlessness makes his a strong Warchief in the raids against the humans of Stormwind. His brutal tactics don’t earn him many friends on either side of the war though and he is a leader who needs to always sleep with one eye open.
Clancy Brown is a seasoned action (with lots of quality Marvel animated experience) and seems like another wise choice for a motion capture character. Brown’s extensive experience in animated projects should have given him all the practice he needs to help bring this kind of larger than life character to the screen.

Gul’Dan is a character who changes quite a bit throughout Azeroth history, but we think it’s safe to assume movie-goers will meet the orc while he is one of the Horde’s shamans. Gul’Dan’s corruption and eventual path towards a darker form of magic will put the Horde in the crosshairs of the Alliance.
Daniel Wu has a lengthy resume, but is probably best known for his roles in The Protege or The Banquet. Gul’Dan is one of the darkest characters on the Horde’s side of the fence, so Wu will have to pull off creepy and corrupt to make the character work.

The early rumors suggested that Klingons would be the main villains in this movie. Those classic Trek aliens have not really had a big presence in previous installments, but writer/co-star Simon Pegg has been quoted as saying that Idris isn’t playing a Klingon. Of course, Pegg laughed and jokingly added a “Or maybe he will,” so we don’t know if thats a real denial of any sort. Remember, this is the same guy who insisted that those Benedict-Cumberbatch-as-Khan rumors were just “a myth.”

Idris also told MTV that he has been working “18-hour days” which could suggest that he is spending some time in the make-up chair at the start and end of each filming day. So I wouldn’t rule out the possibility that Elba is playing a different more complex take on a Klingon villain from the series.

The much anticipated reinvention of the Joker by Jared Leto. Everything we’ve seen is new, strange and feels wrong, but this may be the best thing to do when you want to reinvent the Joker and not copy the previous Joker. Major villains from the DC comics universe join forces for a silver-screen adventure that will finally bring to life classic Batman villains like Harley Quinn (Margot Robbie) and Killer Croc (Adewale Akinnuoye-Agbaje), while also introducing the latest screen incarnation of The Joker (Jared Leto).

Marvel Studios president Kevin Feige has confirmed that Hannibal actor Mads Mikkelsen will be playing the primary villain in 2017’s Doctor Strange movie, according to Entertainment Weekly. As for what character Mikkelsen will play, that’s being withheld as an intentional mystery by Marvel.

“I’ve seen lots of names thrown around,” says executive producer Stephen Broussard. “No one has quite picked the name that we’ve chosen for him. It would be fun to conceal that, if we can.”

Feige said that Mikkelsen’s character will be a sorcerer who rebels against the Ancient One’s (played by Tilda Swinton) ways of dealing with magic. Another rumour claims that Daniel Bruhl (who is going to be part of Captain America: Civil War) is playing an yet unidentified villain and it “is not the main villain in Captain America: Civil War but could potentially be the top menace in Marvel’s Doctor Strange.” What? This wouldn’t be the first time that a component of the Doctor Strange universe was introduced in a Captain America movie. It was during a pivotal scene in Captain America: The Winter Soldier that HYDRA agent Jasper Sitwell confessed that the Sorcerer was on a HYDRA watch list. “Bruce Banner, Stephen Strange… anyone who is a threat to HYDRA!”

Set in the time between Revenge of the Sith and A New Hope, Gareth Edwards’ Rogue One reportedly is going to follow a band of Rebellion fighters who are tasked with stealing the plans for the Death Star. You know, the ones that eventually will allow a scrappy pilot named Luke (Mark Hamill) to drop a well-placed blast into the heart of the ominous structure.

No doubt the villain will be an epic one. We really feel JJ Abrams is creating an epic villain in the form of Kylo Ren. All we know is that whatever villain shows himself/herself in Rogue One will be a memorable one. Seeing as this is before A A New Hope, will we se a new Darth Vader?

What do you guys think? Let us know in the comments below…