20th Century Fox’s Christmas present to the world this year was the Alien: Covenant trailer, and judging by the reactions, it’s exactly what fans were hoping would be waiting under their trees: a creepy, disgusting, flat-out terrifying return to form for the Alien franchise after the polarizing Prometheus. Even better, that trailer was just the start of it, as the Alien: Covenant marketing campaign is the gift that keeps on giving. Today, Fox has come back with more Alien-themed treats in the form of three new official photos from Covenant. Click through to see them all.

The new Alien Covenant photos below come to us via The Playlist. 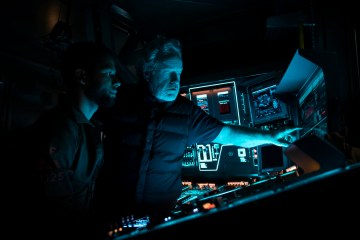 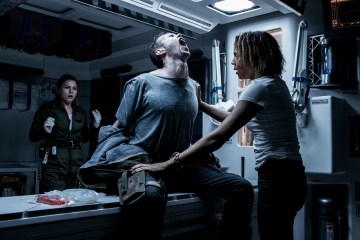 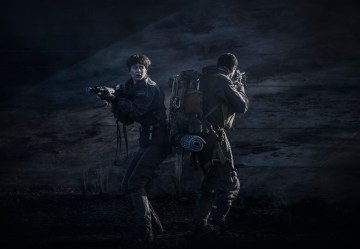 First up, we’ve got a behind-the-scenes photo of director Ridley Scott talking to star Jussie Smollett. Based on the Alien: Covenant footage I saw, his character seems to work closely with the pilot played by Danny McBride. The two are close enough for McBride to crack risqué jokes about Smollett’s wife and the like (though it’s not as clear if the two are close enough for Smollett’s character to appreciate those jokes). Here, Smollett seems to be looking over a control panel of some sort.

Next up is a photo of two Covenant crew members played by Amy Seimetz and Carmen Ejogo. If you remember the part in the trailer where Ejogo begs Seimetz to unlock the medical bay door and let her out, this moment directly precedes that — the guy in the middle is the one that’s about to have a neomorph burst out of his back while Ejogo watches on in horror. Sorry, bro.

And finally, here’s Katherine Waterston as Daniels, looking very tough and also very terrified as she hunts for something out in the wild. Since we don’t know what that something is, though, the most notable part of this photo may be her distinctive haircut. Waterston has revealed that she took inspiration from an unexpected source — Daniels’ hairdo is based on Ezra Miller’s in Fantastic Beasts and Where to Find Them. I bet Daniels could use an Obscurus to help face down some of those aliens right about now.

Ridley Scott returns to the universe he created, with ALIEN: COVENANT, a new chapter in his groundbreaking ALIEN franchise. The crew of the colony ship Covenant, bound for a remote planet on the far side of the galaxy, discovers what they think is an uncharted paradise, but is actually a dark, dangerous world. When they uncover a threat beyond their imagination, they must attempt a harrowing escape.